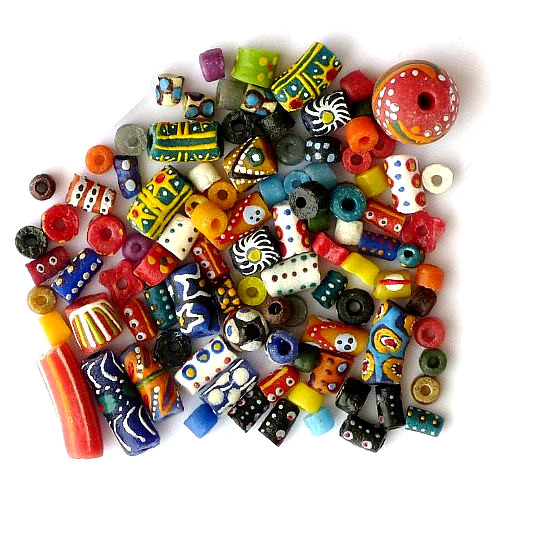 Humans apparently have used beads to adorn their bodies for a long time . Archaeological remains found in caves such as the Grotte du Renne in the area around Arcy- sur- Cure in France indicate that Neanderthals wore beads made from teeth and bones as pendants .

In Ghana beads made from natural materials have been found and dated to around 1450BC It 's thought that glass started to be used when European traders arrived in Ghana .

In Ghana I've been told that tribes tend to specialise in different crafts ; I guess the crafts relate to the tribe tradition availability of raw materials and historical influences .

There are a people that habitat the Eastern region of Ghana called the Krobo people; in that area of Ghana there is a landmark called Krobo Mountain and this was the spiritual and physical home of the Krobo people .

They are synonymous with making glass beads from powdered glass which are then carefully painted with a mixture of ceramic dye and powdered glass locally known as sɔsɔ to create a design .These beads are in fact known as Krobo beads .

Beads are an important part of the krobo peoples culture; for instance with a new born infant their name will not be announced until the "La" a combination of three special beads strung together; a white bead called nyoli a blue bead called kɔ li and a black bead called tovi is attached to the wrist of the infant . Because of the La in older times the krobo people were called "la lin "

A string of Oblekumi beads was worn around the neck of an expectant mother to draw good spirits to herself and to repel evil powers that may want to harm her and the unborn baby .

When young adolescent girls reach the age of puberty they must take part in a ceremony called "Dipo" .They participate wearing beads around their waist neck wrist arm and ankle . These days most wear beads mainly for fashion purposes because they are pretty .

The basics of making the glass beads in older times involved powdered glass moulds and cassava leaf stalks; the stalks would burn away during the firing process leaving a hole for threading of the beads .

Ghana was the land of my late wife's ancestors and an important heritage for my daughter who is half Ghanaian . She hand fabricates earrings and other Jewry including using Krobo beads . We acquire them from an Ethical source where it helps support a local craftsman who lives in Ghana and who produces them . She will be adding to her collection on Etsy; also they will be added to accessory section of products on this web with a link to Etsy when they are ready

down load pdf version of page